Acts 14:8-10
In Lystra there sat a man who was lame. He had been that way from birth and had never walked. He listened to Paul as he was speaking. Paul looked directly at him, saw that he had faith to be healed and called out, “Stand up on your feet!” At that, the man jumped up and began to walk.

In this event, there was a man who was listening to Paul as he was speaking. When Paul looked directly at him, there was something about the way this lame man was listening that exuded faith. It gave Paul the confidence to jumpstart the lame man’s healing process with a verbal instruction. How we listen matters. How we look as we listen matters. May we seize every opportunity for an encounter with God and healing by showing that we’re listening with faith.

Let’s pray: Heavenly Father, in every opportunity of hearing your word preached, help me listen with great faith. I believe that anything can change in a moment with your power. In Jesus’ name, amen. 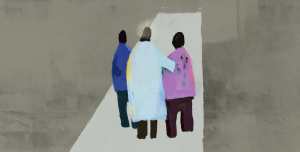